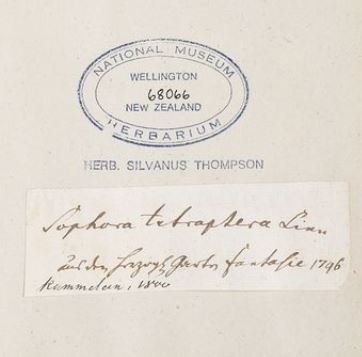 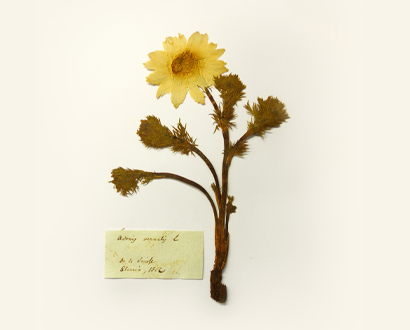 Work of an important botanist, once thought lost, potentially uncovered in our collections.

Herbarium specimens stored at Te Papa for almost 150 years may be those of German botanist Johannes Fluegge (1775-1816), whose botanical garden was destroyed by French troops in 1813 and botanical collections thought to be lost.

The story begins with Marlies Thiedemann, wife of the German ambassador, taking a back of house tour of the botany collection. During her visit the sample of a kōwhai tree growing in Germany in 1796 called her attention. The specimen had a hand-written label in German and in old handwriting style (see image top right) that was deemed illegible to the Curator of Botany Dr Carlos Lehnebach.

Marlies was able to decipher the mysterious text, revealing the specimen to have been cultivated in the garden of a German noble family near Bayreuth1. Because the dates indicated in the label are about 26-30 years after Captain Cook's first voyage to New Zealand it is very likely this tree originated from seeds botanists on the Endeavour collected along the coast of New Zealand. This kōwhai returned to New Zealand in 1877 as part of the Thompson-Baker Herbarium, a collection of 28,000 plant specimens bought by Sir James Hector, director of the Colonial Museum that later became Te Papa, from the British Museum (currently Natural History Museum).

In light of Marlies’ discovery, Carlos asked if she would be willing to undertake some voluntary work of a similar nature, focusing on the ‘Thompson Baker’ botany collection which was largely labelled in this old handwriting style. So started an arrangement which saw the sorting, cataloguing and photographing of 7,400 specimens and the re-attribution of specimens potentially collected by European botanists whose work was thought largely destroyed by wars. Here, the Foundation gets Marlies’ account of her journey.

“I was looking for a satisfying project far away from my residency and diplomatic duties, so was very happy to take on the volunteer work Carlos proposed. The collection I was to work on was assumed to be the "Thompson part" of the combined herbarium of Silvanus Thompson and John Gilbert Baker - the first a teacher in Yorkshire, the latter one of his pupils, who went on to become keeper of the herbarium at Kew Gardens in London.

As my work progressed, I noticed many of the orchids had been collected at places in Germany, for example near Goettingen, my university from 1974 to 1980, which didn’t fit with the attribution of the works to Thompson. As I found more boxes labelled "Ex horto botanico Gottingense" (from the botanical garden of Gottingen) my curiosity was peaked.

It was a little bit like archaeology which I have been fascinated with since childhood; opening something unknown, deciphering old scriptures (some looked like hieroglyphs....), finding treasures.
With a few exceptions the plants were in a very good condition, some looked as if they were cut the day before. In particular, yellow and blue pigments are still vibrant, fragile structures like stamina [stamens] intact, the lavender exuded a faint scent.

They were collected between 1765 and 1864 in Germany and France, on Greenland and at the Cape of Good Hope, in marshes and in the Alps, during excursions as well as in private or academic gardens.

My doubts about the Thompson attribution deepened. His name didn't show up, there were no British plants present, the time schedule didn't match, the paper [used to press the plants] was produced in mills on the continent (I'm also working on their identification, but that's another story). So I did some intensive research online, contacted botanic institutions in Germany (Hamburg, Jena, Kiel, Goettingen, Berlin), sent photos of [specimen] labels, still no one had an idea!

Eventually however, my persistence paid off. The archive of the Herbarium Hamburgense, located at the Institut fuer Pflanzenwissenschaften und Mikrobiologie (Institute for plant science and microbiology), holds the autobiography of Johannes Fluegge, a botanist from Hamburg who established the first botanical garden. That same garden was destroyed by French troops in 1813 and the majority of his [herbarium] collection was believed lost.

In his autobiography however, he describes in detail when and where he collected which specimen. This, and a comparison of his handwriting against the labels on [specimens of the Thompson and Baker herbarium], gave further substance to my theory that he is behind a big part of the collection. So Fluegge's work is potentially not lost! You can imagine how happy the Hamburg curators are at the prospect.

Through my work at Te Papa and now in Hamburg herbarium I learned a lot about collecting and travelling in old times, about the people and their dense network (without phone and internet) and last but not least reactivated my knowledge in botany.

Huge thanks to Carlos, for putting us in touch with Marlies, and of course Marlies herself for her time spent on the collection and recounting her story for us. If you are interested in a private tour of our botany collection yourself, please do reach out to our Relationship Manager, Danielle Genty-Knott - Danielle.Genty-Nott@tepapafoundation.org.nz

He was born into the family of a pastor at St. Michael’s church. His interest in botany was sparked during high school years; from 1792 on he went on excursions f.e. to Heligoland and Neuwerk (islands in the North Sea), exchanged duplicates with friends and acquired a herbarium of 1,200 specimens.

From 1795 to 1798 he studied medicine in Jena (Thuringia). Whenever there was time he explored the surroundings and picked plants "as many as I could carry". The Harz mountains provided another attractive territory for botanists and a large part of the moss collection was built up during these years. In summer 1798, he decided to move to Vienna for further studies, on the way (together with his friend Gustav Floerke, the lichen specialist) he couldn’t resist to collect plants (especially in the areas around Regensburg and Salzburg). And encouraged by famous collectors he met in Vienna – the Jacquins and Trattinick – he decided to turn away from medicine and towards botany. The legacy of one of his grandmothers provided financial independence.

Winter 1800/01, he spent time in Goettingen to prepare for the "Grand tour" to France which he undertook from April 1801 until July 1803 with his friend Friedrich Stromeyer (later professor for chemistry in Goettingen). Southwest France, the Pyrenees, the Mediterranean coast up to Nice – paradise for a Nordic botanist. Fluegge not only collected plants by himself,  but also received duplicates from other experts.

The next years see him travelling within Germany (to look for a place to settle) and back to France (1806 to 1808, mainly at Bordeaux).

In 1810 he decided to go back to Hamburg. His plan to establish a botanical garden gained hugh interest and he could raise money to buy the grounds of an old plant nursery just outside the city walls. Other botanists sent seeds, wealthy people had their gardeners provide cuttings and young plants. His handwritten inventory of 1812 lists more than 3,000 different species, well arranged in rows along the walkways (trees and shrubs) and beds. The garden wasn’t for show only, but for studying, too. Plants were pressed and dried for a herbar (some at Te Papa still have the inventory number attached).

1813 - the catastrophe! The French occupants ordered to take down every tree and shrub near the city walls to get a free shooting range. The garden was ransacked. Fluegge never recovered from that shock and died in June 1816.  (1)

In the 1820s Ernst Ferdinand Nolte (1791/ Hamburg – 1875 / Kiel) acquired Fluegge’s herbar (or a part?) from the widow and integrated it into his own. He also took papers including the autobiography of which he made a copy (now in the Hamburg archive) (2). Nolte was professor for botany and director of the botanical garden in Kiel from 1826 to 1873. After his death, his herbar was split and a large part sold to the British Museum (3) – and then to Wellington.

1. This in itself is fascinating,
2. More of this story can be found at natstand.org.uk